skip to main | skip to sidebar

No FDI Retailer in East Delhi 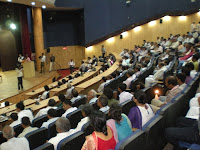 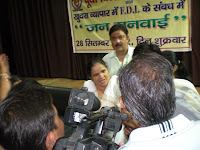 In an unprecedented initiative, East Delhi Municipal Corporation (EDMC) organized a public hearing to take note of the peoples’ opinion on the issue of FDI in Retail. People from all sections of society including street vendors, small shop keepers, trade unions, resident welfare associations, civil society representative participated in the public hearing.

Delivering the opening remark, Dr. Annapurna Mishra, the Hon’ble Mayor of East Delhi said that the purpose of the initiative is to take note of the peoples’ voice to help the corporation in shaping trade policies.
An opinion poll was also conducted to know the views of participants. 98% participants opined against FDI in Retail.

Concluding the public hearing senior journalist Sh. Ram Bahadur Rai said that in the past the Prime Minister was against FDI in Retail. He alleged that such policy decisions are influenced by powerful international lobby groups.

The Leader of opposition, Ms. Varyam Kaur, who was also invited for the public hearing came at the closing stages and abruptly interrupted the meeting shouting that the Municipal Corporation can not organize such event.

The Hon’ble Mayor stated that public opinion is evident on the issue of FDI in Retail and respecting the peoples’ verdict the EDMC would bring a motion to oppose FDI in Retail and would not grant any trade licences to FDI retailers.  She said that a detailed report of the proceedings would be send to the Hon’ble Lt. Governor and Chief Minister of Delhi.